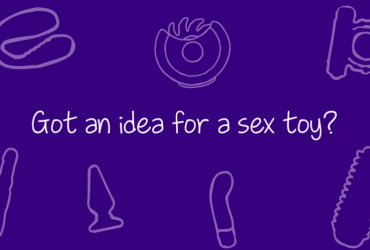 If I had a dollar for every time somebody told me that they could design the next best orgasm, I’d be living la vida loca somewhere off the grid. But alas, I don’t have the dollars, and as far as I know, most of those orgasms never came to fruition. But still, a girl (and her friends) can dream. And dream I have. As someone who’s been immersed in the sex toy industry for over a decade, I’ve dreamed about the ultimate orgasm brought out not by machine. I had no idea that if I dreamed it, it could come… true.

I had never heard of Trevor Murphy before watching Lovehoney’s video for their 2015 Design a Sex Toy competition. I also had no idea that Lovehoney was looking for the next! best! sex! toy! But after watching their video, I learned that Murphy had an idea for a lickable wheel of love, and his invention (known as the Sqweel) has sold over 100,000 machines worldwide. Talk about a lot of tongue.

And now, you too can follow in Murphy’s footsteps and make money off of toys for making love! Join the competition.

It’s time to think pink. Or balls. Or whatever it is that you believe will help you win the Design a Sex Toy competition. Give new meaning to “If you build it, they will come.”

Get inspired. Watch the video for this year’s competition here:

Then learn more here, and enter one of three categories (for him, for her, or for both) at designasextoy.com.

What toy would you have made?