Last week, Krissy Eliot investigated Dixie De La Tour’s Bawdy Storytelling — the event where people share their sexual stories on stage for hundreds of people — and she found far more than she bargained for. 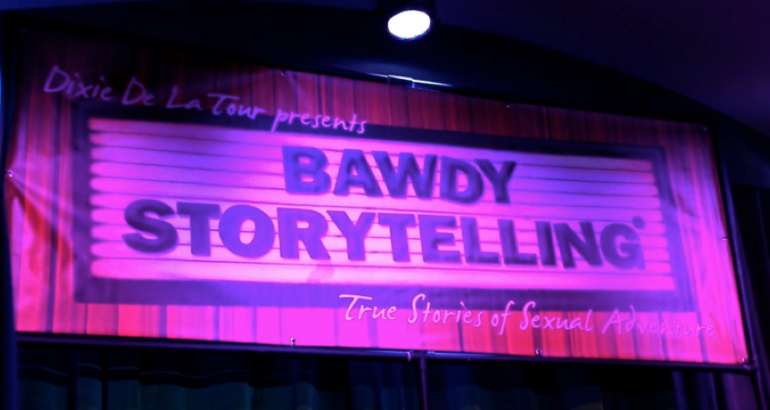 The front entryway was bustling with people, so I hurried out of the way and into the theater, looking around like a teeny bopper at a Bieber concert, clutching my camera. Crystal chandeliers hung daintily over the scraped-up hardwood floors and the room was lined wall to wall with chairs; the place was gonna be packed.

Dixie De La Tour, the founder and host of Bawdy Storytelling, was hurrying to eat a tiny sandwich while frantically looking through stacks of boxes in the back of the room. When she saw me, she set the sandwich down on one of the tables lining the back of the theater. “Sorry, I’m eating,” she said (as if that was offensive), to which I said “Oh, hey!” and smiled with teeth full of protein bar. The proverbial ice was shattered. 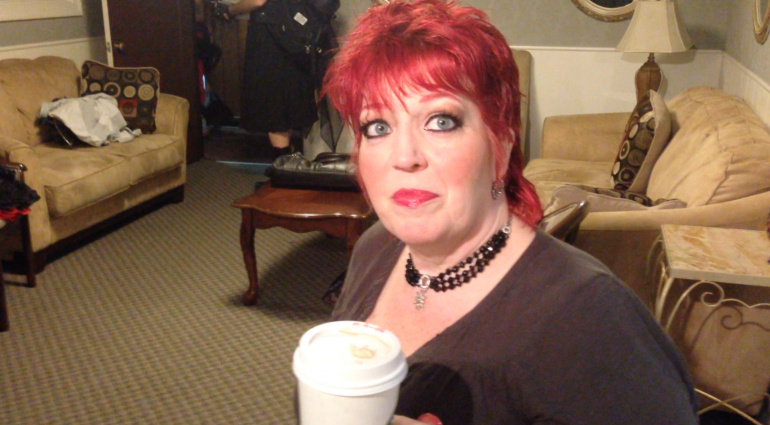 I had never met Dixie before, but she was just as vibrant as I expected her to be: with fiery red hair and a voice that carried through the entire club. She seemed strong and powerful, but warm at the same time — a living, breathing depiction of the show.

I followed Dixie up the steps into the Lady’s Lounge (complete with plush gold couches and surprisingly clean toilets) and watched as a saucy drag queen named Sister “Floozy” Flora Goodthyme applied thick layers of brown blush to Dixie’s face. (Flora is a member of The Sisters of Perpetual Indulgence, an order of queer nuns that advocate for human rights. God, I love San Francisco.) Flora Goodthyme — one of the lovely Sisters of Perpetual Indulgence.

“A lot of us think we’re alone in the things we do,” she said. “[Sharing can] make you feel less alone in the world. That’s why I love storytelling.”

Minutes later, Dixie slipped into a bright red ensemble featuring diamonds, clubs, hearts, and aces before descending the stairs to greet her guests. The other performers started pouring into the ladies room, applying their make-up and talking to me about the show. I spent so much time conversing in that bathroom that I feared the storytellers would start asking me for a towel or a perfume spritz. But instead, they offered me their time, their tales, and their ingenuity.

Star of The Whorecast and adult performer Siouxsie Q described the importance of story to me with examples from T.H. White’s The Once and Future King; Allison Moon was just as clever in person as she is in her lesbian werewolf novels when she talked about how getting off is her favorite thing outside of getting it on; and writer/sex worker Maggie Mayhem even waxed poetic on leftist political views and how storytelling forges community.

Downstairs the guests were arriving and grabbing cards for BANG-O, the Bawdy game where strangers ask each other naughty questions and submit their completed cards for a raffle prize. The game is designed to get people to talk freely about sex — and it works — forging friendships and resulting in hook-ups aplenty (hook-ups rumored to happen in the bathroom).

When people go to Bawdy, they see it as a judgment-free space. What happens in Bawdy stays in Bawdy (if you want it to). Dixie even allows performers to use fake names in the show; as long as the story is true, the stage is theirs.

I tried my hand at BANG-O myself, but found I could only fill out the card half way. Another great thing about Bawdy is that it exposes you to quirks and kinks you’ve never heard of. I’m developing a sexual to-do list as we speak. (I’m gonna skip the piercing of the naughty bits, though.)

The conversations I had with the guests went deeper than just sex and BANG-O talk. Intelligence oozed out of the audience’s every orifice; these people were attractive in a way that made my armpits sweat through my hoodie. But I would have liked them all anyway — had they not referenced Proust or the state of contemporary art in casual conversation. What really endeared them to me was their lack of judgment, their enthusiasm, and their willingness to stand so close to me after we’d only spoken for 30 seconds. The performances at Wednesday’s Lucky! show were killer, and The 7th Anniversary show had no problem murdering even a suggestion of low expectations.

Friday night, after I had helped renowned sex star and eco-sexuality activist Annie Sprinkle into her dress and duct-taped another performer’s pants, I raced down to the theater to take my place in the broom-closet sized space they called “backstage” and crouched down with my camera. The author and Dan Savage taking a selfie backstage.

At intermission, Dixie grabbed me and told me there would be a special guest coming at 10:30. And an hour later, I was huddled backstage with renowned writer and podcaster Dan Savage, who had decided to pop in for a surprise visit. When he went on stage to greet the audience and give out the BANG-O prizes, it was like the Godzilla dildo had attacked; excited screams echoed through the theater. People love that guy. As the storytellers walked through to take the stage, they shook his hand like high schoolers do with the principal on graduation day. I felt like my presence was infringing on some weird honorary ceremony, so I tried to wedge myself in the corner.

The show continued with stories of sex, drugs, humor, and love. Sexpert and writer Midori finished the stories off with an inspiring tale of kink, and musician Lark played the most charming tune about period sex that anyone has ever heard. The audience let out another Godzilla scream as Dixie announced that everyone in the audience would be receiving the gift of Lelo sex toys (as if people didn’t have enough reasons to love Bawdy already), and the show came to a close — with all of the guests hugging their new friends goodbye as they made their way through the front doors.

Earlier that night, Dixie had spoken of a recent email she received from a woman who was suffering from depression. The woman explained that even though she has social anxiety and hates being squished up against others, when she was at Bawdy, she didn’t care — because the people are different. She said it was just what she needed, just the people she needed. Dixie’s eyes glazed over with tears as she told the tale. “Annie Sprinkle,” Dixie said. “I was coaching her last week — and she said: ‘What’s the secret of good storytelling?’ And I said: ‘Vulnerability.’ Admit you make mistakes. Admit you’re human.” Dixie said. “[Bawdy] is about real human connection. This is not about being cool.”

If you’ve been dreaming of a place where all of your quirks are celebrated, where all of your flaws are met with understanding, and respect is the status quo, then fantasize no more. Such a place exists in reality, and it was created by Dixie De La Tour. Bawdy Storytelling is an experience rooted in acceptance and authenticity — and it’s as brilliant and genuine as the woman who created it. At Bawdy, you leave your small talk at the door. It’s a place where people come together (literally and figuratively) to say, “Hey, you’re okay, I’m okay. You’re perfect the way you are, and no — you’re not alone.”

Stay tuned to gasm.org for our video piece on Bawdy Storytelling — coming this March.

Would you go to Bawdy Storytelling? Why/why not?