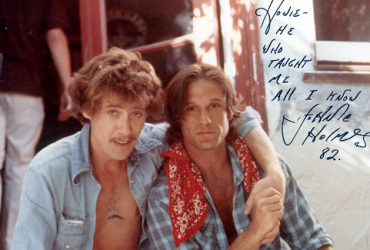 John Holmes and Howie on the set of Pizza Girls (1979)

As the saying goes, “Hindsight is 20/20,” so when I spoke with Playgirl’s 1979 “Man of the Year” about his book, I asked him to look back and reflect on 20 things that he learned from his life and his love. 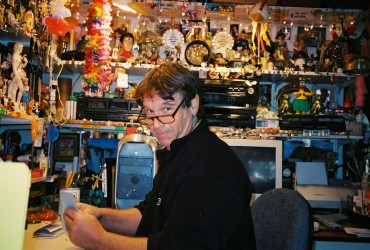 1. Marriage is an adjustable union.

2. Intimacy can come from sexual failure.

“Failure humbles us.  It makes us vulnerable.  It reveals our humanity. It forces us to explore and learn about our changing body and what really works for us sexually.  It forces us to share this information with partners and invites them to share their needs with us. Intimacy.  It’s ever so much more satisfying than alienated false bravado.  It’s taking risks that pay off.”

3.  When a woman truly loves you, it has little to do with your looks.

“I was thirty years old in 1978 when I posed for Playgirl.  I weighed 143 1/2 pounds.  I had the body fat content of a red ant.  To mine own eyes, this was the zenith of my physical fitness.  In the great irony department, my wife couldn’t have cared less.  The bag of meat in which I dwelled was never the real story for her.  It didn’t detract, but it was nowhere near the primary source of her affection.  She was a big fan of Chung Fu, inner truth.”

4. There’s a difference between personal sex and professional sex.

“George Bernard Shaw once opined that “Hell is when you have to do – what you like to do.”   In personal sex, if one person grows distressed or distracted or recognizes something is just not quite right, you’re free to stop and go have a cup of tea or a slice of pizza.  In professional sex, you have to keep a smile on it, your dick at full attention, and do whatever the director is telling you.  It’s more like an Olympic event than any real lovemaking.”

6. There’s a price to pay for free love.

“It was the time of ‘Free Love’ and sexual revolution.  For many in the ’60’s and ’70’s on up to the onset of the AIDS epidemic in the early ’80’s, monogamy went out of fashion like the crew cuts on men of the 1950’s.  We thought in the Age of Aquarius we could do better than jealousy.  We thought we should cure it, like imperialism and racism and chauvinism.  True love proved to be the fly in the ointment.  We learned it difficult to be Romeo and Juliet and practice free love at the same time.  We spent eons of time discussing our relationship.”

7. It’s okay for me to experience sexual pleasure.

“By experiencing some Masters & Johnson’s training exercises my wife took me through, I was forced to explore some deeply emotional blocks and fears I had about letting myself experience sexual pleasure.  I had the realization that nobody in authority in my life – not Mommy nor Daddy nor Rabbi nor Reverend nor teachers nor counselors nor ANYBODY in authority had ever said it was ‘okay to experience sexual pleasure.’  Through the mainstream culture, I had absorbed the concept that only marriage could countenance sexuality.  Everything outside of that was wrong.  It was sinning.  It was not allowed.  I had tearful breakthroughs during those exercises with my wife (who was only my girlfriend at the time).  When I tell these stories to audiences in lectures or to readers, I refer to them as my gift for them.  For some, it is unnecessary.  For others, it is manna and amrita.”

8. Bisexuality is a sexual litmus test.

“What experiments in bisexuality taught me was that I was largely programmed for plump female buttocks.  I found sexual activity with other males like a curious attempt to learn how to drive a stick shift.  Ultimately, I had an inability to ever attain orgasm.  Behind closed eyelids, I would be running through pictures of naked female memories trying to engage my arousal.  It just wasn’t  my cup o’ tea.  I don’t like chutney either, or opera, and I’d much rather see a movie than attend a play.”

9. Even after finding the love of your life, you will get distracted by other women.

“Yeah, how about that!  That was a curveball from the universe I wasn’t expecting.  I figured after marrying my fairy tale princess I’d be done catting around.  My dick never got that memo.  My wife was kind enough, steadfast enough, brave enough, and in love enough to work out these issues with me for many, many years of our marriage.  WOW!  My whole career in the adult industry was an attempt to pacify that need for a sexual smorgasbord.”

10. “Sexual freedom in marriage makes us crazy faster than we can get sane.”

“This was a quote from the late Steve Gaskin of The Farm about the decision to stop trying to maintain sexually ‘open’ marriages in their community.  The jealousy problems of who is getting what they want and who is feeling hurt by their partner’s abandoning them at any given moment . . . CAN BE WORKED OUT. BUT . . . it takes a lot of time and effort and uses up a lot of energy with the potential for massive amounts of pain and hysteria.  Yes, it can be sorted out – sometimes – but often at great cost to everyone involved.  Gaskin’s quote essentially states the conclusion succinctly without enumerating all the messy details.  I thought it brilliant. Still do.”

11. When thinking about career, go with your common sense.

“Make-up.  Who knew?  I loved seeing myself after coming out of make-up.  That guy was always better looking than me. Getting to have sex – and often the opportunity for intimacy – with an astonishing array of extraordinary women.  Of course, one had to endure the occasional nightmare, as well.  ONE SIZE DOES NOT FIT ALL! And we are not all made to fit with everybody else.  Some unions should never even be attempted.  It was largely a trial by ordeal. What was “golden” of the golden age was an attempt to depict genuine human sexuality within the context of genuine human behavior – real sex in real movies – as opposed to just meat  shots of naked humans copulating.  Having been a part of the “Golden Age” dance, I would have to say it was an experiment with very mixed results.  It’s attained a romantic patina with the passage of time that can be very misleading, but many people still prefer it to the return of just plain sex scenes without story or context.”

13. Sucking it up, or how to handle having a stunt cock.

“You failed.  You couldn’t get or stay hard.  If you were lucky, they had a stand-in, a “stunt cock,”if you will, ready and able to come in and take your place.  If there was no stunt cock, you were in for a period of torture where you had to try and get your dick to come to the party under the watchful eyes of cast and crew and whatever hangers-on were on the set that day, too.  It was YOUMILIATION witha capitol YOU!  The shame and embarrassment could be off the charts. But — if there was a stunt cock on board, it was just like baseball.  The director was the manager who came out to the mound, took you out of the game, and brought in the relief pitcher.  First, they’d shoot you simulating the whole sex scene, including orgasm — and then they’d bring in the stunt cock, shoot only in close-ups of his sexual function, and then take it all the way to his orgasm without  ever pulling back the camera to reveal that he is not you.”

14. Even the immortal John Holmes was mortal.

“Babe Ruth. Paul Bunyan. Frank Sinatra. Muhammed Ali. Elvis. John Holmes. All were larger than life. Unfortunately with Holmes’ death, the denial apparatus of the industry kicked in with, ‘John Holmes was an IV drug user. John Holmes was a bi-sexual. It was an isolated case. It won’t happen to me. I won’t get AIDS.’ The industry hardly skipped a beat. Being socially responsible was never its strong suit and John Holmes sadly represented that aspect of the business as well. Since his death, it’s been revealed that he continued to work for a time after having contracted the AIDS virus without informing his partners. How else can this be construed as anything but a desperate and despicable act? It is well beyond our reasonable comprehension to excuse. It leaves a sour taste and darkens the entire canvas of what otherwise might have remained a colorful story of an outrageous character.Be that as it may, somebody had to be the sexual Paul Bunyan and John Holmes, for better and worse, was it.”

“Mommy!  Well, Doctor, this could take a few decades on your couch.  Me and my Ma, always called her, “Ma,” didn’t always see eye-to-eye. See, she thought she was Catherine the Great and I was supposed to be the obedient Russian Army.  I was perfectly welcome to have her opinion, but when, God forbid, I didn’t, well, therein lied the rub.  She would frequently disparage my choices in life.  And of the many epithets hurled at me over the years, her “If you’re normal, I don’t want to be,”  may have been the most printable and the kindest. Mommy! Loved her anyway.  We play the cards we get dealt.”

“These were the words of my wife, Carly.  I was writing the chapter about my first leading role in a film called Babylove and Beau with Sharon Kane. I was writing all about the climactic love scene on a beach in Half-Moon Bay.  We’d had to walk through a field of artichokes to get there and I described how we all picked some to take home for dinner.  Then, I waxed poetically about the great love affair of our characters, how it affected me and Sharon, about all the beautiful passion of our last sex scene and then, it was just the end of the movie. And silence. My wife read all that and said,

‘You know what I liked best about that chapter?’

“That’s the Sufi’s!  You can’t beat the Sufi’s for pithy wisdom.  In this case, if it really needs any further explanation, we’re talking about somebody feeling their oats.  Somebody full of confidence and vim and vigor and looking to take on the world. Someone who wants to test their mettle against the forces that would oppose them. Ali needed Joe Frazier. Samson needed Delilah.  And I needed the adult film industry.”

“Especially when it’s called ‘Creaming Yourself.’ At least that’s what Chuckie Pearl called it when he showed me and some other boys how to do it in a toilet stall.”

“What sex life?  Call me back when they start going to school.”

20. The greatest thing I ever learned was “just to love and be loved in return.”

From Hindsight - Part Six, “THE AFTER PROM:”