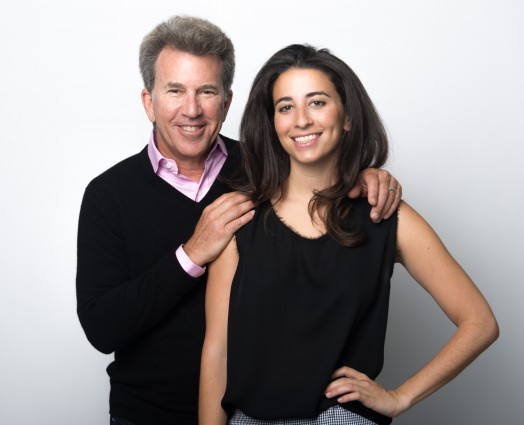 At Gasm.org, we pride ourselves on bringing you the latest information on the most revolutionary and empowering sex products on the market, and we would be doing our audience a disservice if we didn’t talk about Sustain, the environmentally conscious condom company run by the father/daughter duo Meika and Jeffrey Hollender (co-founder of Seventh Generation).

In this interview, Sustain’s founders discuss their mission to empower women, save the environment, and build a brand that will facilitate sex positivity for years to come. 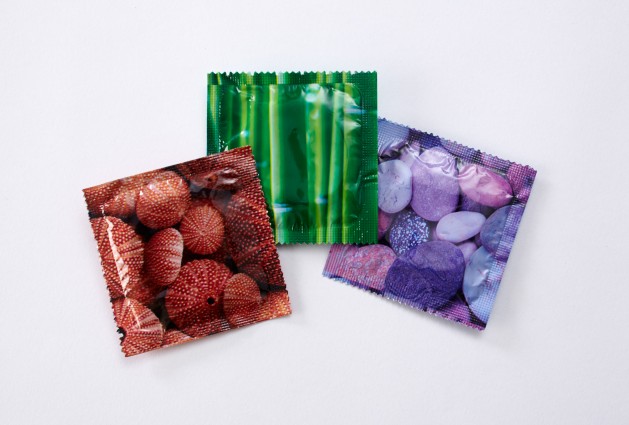 So how did you two decide to do this together? What’s the story? Was there a eureka moment?

Jeffrey: As you might have read, this idea was born 20 years ago when I trademarked the name “Rainforest Rubbers,” and that was something I had never pursued until I left Seventh Generation. And I was thinking about what business I wanted to start next. And I had been very focused on this challenge of how to make responsible sustainable products good, rather than less bad. And as I read and researched and learned more and more, specifically about condoms — because that was our first product — I realized that a condom could very well be the most sustainable product that anyone could produce on the planet, because it does so much good, and virtually nothing bad. And that was my eureka moment when I thought that this was really the perfect product for someone who has spent most of their life committed to sustainability to pursue.

Meika: Mine was a little bit different. I didn’t have the initial idea, obviously. But when Jeffrey and I had been discussing this, and I was thinking about joining him, I think for me, what was the most shocking and really made me feel a sense of urgency in doing this, was just talking with friends of mine…. and really talking honestly about condom usage in general and sexual health with 25 and 30 year old women. I was really getting hit with the reality that so many women my age and my peers are so irresponsible when it comes to practicing safe sex. And nobody is really talking about it. And it wasn’t something I thought about before. So starting this conversation and creating a product focused on women to address these issues became really important to me. 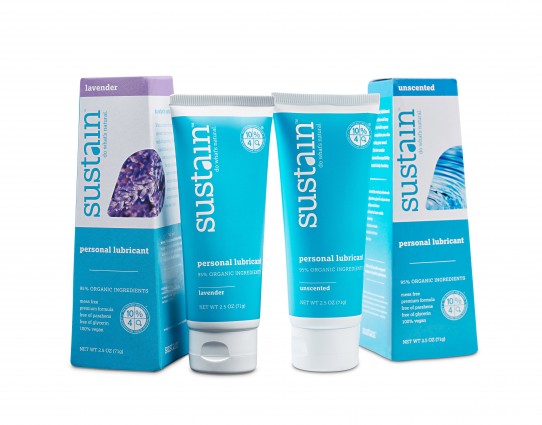 There are other fair trade condoms and products — there are also vegan products, environmentally safe products, etc. Like Aloe Cadabra. What exactly makes yours any different from these?

Jeffrey: So Aloe Cadabra is only in the lubricant business, and their primary focus is to sell online. They have a good product that has many similarities to our lubricant, but they don’t also have a condom or wipes, and their aspiration, I don’t think, isn’t to create a whole brand that provides all of the different products that one might need to have a real healthy and safe sex life. So, I think what distinguishes Sustain, and it really comes from our background with Seventh Generation, is creating more than a product, but really creating a brand and whole assortment of products that consumers can depend upon to get the safest, healthiest products, in whatever category they need. But I have no criticism of Aloe Cadabra. I think it’s a good product.

Meika: And I think with the condoms, they’re the most differentiated because there are no other Fair Trade certified condoms sold in the US. So that’s a huge point of differentiation for us. Also, most brands, about 90 percent of the brands have a carcinogen in the latex called nitrosamine, which is very easy to remove and prevent during the manufacturing process, and we’re actually one of only two brands who don’t contain carcinogens.

Meika: We started with condoms, and we felt we could make the most sustainable condom in the world. And we’d be the most differentiated in that category, and we succeeded. There are other natural brands in the categories we’ve gotten into. But as Jeffrey said, it’s about starting a brand around women being empowered get on top of their sexual health. And with that we need to create products in a wealth of categories so they can do that.

Jeffrey: When we talk to consumers, the issues that are problematic with both condoms and lubricants, are just laregly unknown. So, we freely found, in this lubricant launch that we’re doing, that most people have absolutely no idea of the health risks associated with traditional lubricants. It’s gonna take, and we saw this with Seventh Generation, it takes more than one brand to build the kind of consumer awareness that’s required to get large amounts of people demanding and pursuing healthier, safer products. 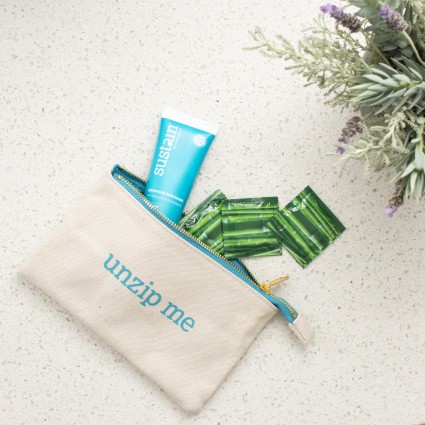 Sustain’s “Unzip Me” pouch with condoms and lube inside.

Jeffrey: No. Glyde is not Fair Trade certified. Glyde does claim that they are Fair Trade on their website, but if you were to ask the only organization called the Fair Rubber Association, they are not certified and have not gone through the certification process with the Fair Rubber Association, which is the only way the public can be confident that there has been independent verification and evaluation.

Meika: There is only one Fair Trade organization that certifies rubbers [in the US]. And that’s the Fair Rubber Association.

How exactly does the brand empower women?

Meika: That’s a good question. I don’t love to use that language sort of externally, because I think a lot of women don’t want someone to tell them they’re going to empower them. But, it’s a much bigger issue in conversation and mission, than to just get them to buy condoms. That’s part of it…. We are really trying to start a conversation and get women to start talking about sex and sexual health and reproductive rights. The fact that 19 percent of single sexually active women use condoms regularly in the US is a huge problem; They’re not taking care of their health, and lot of of that is because they’re not really talking about it. So, part of this empowerment does come from getting women, of course, to practice safe sex. To use condoms, to buy condoms. But also, a lot of women have vaginal dryness and need to use lubricants, and we don’t talk about these issues a lot. So a lot of women don’t deal with them and don’t fully enjoy their sex life. It’s a complex issue, and we’re trying to start a conversation around it.

Also, when you think about the brands that have dominated these categories forever, they’re all male-oriented and male-focused. Women actually buy 40 percent of condoms in the US, yet the big brands don’t market to them. So we also saw a huge opportunity. Obviously, women are buying condoms, the ones that are, but the 500 women that we surveyed felt very left out of the conversation, and that goes back to the stereotypes and stigmas, because we do live in a somewhat sexual repressed patrarchal society, and we’re trying to fight against those things.

Jeffrey: And one of the biggest examples of the stigma comes from laws that still exist… where women can be arrested on the suspicion of prostitution for simply carrying a condom in their pocketbook. What a horrible message that sends to young women about condoms being a thing they should be proud of. And we have worked with a group in Sacramento to provide them with free condoms, to make a donation to them to help change that law. 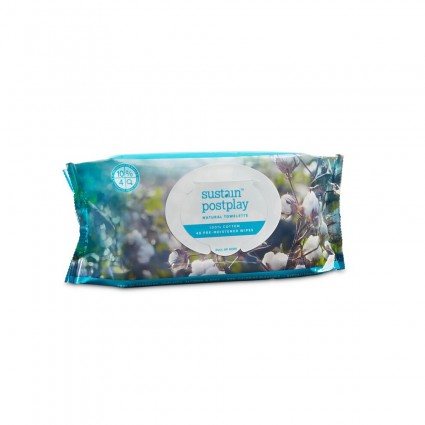 What would you say to someone who told you how very straight your marketing is?

Meika: We would say we know and we’re working on it. We were starting out to focus on women, and particularly straight women, in what we were doing and the brand we were building. So we built our website and everything that came with it, around that. In the last couple months, we’ve been making a concerted effort to really engage the gay community — doing everything from writing blog posts particularly for them catered to why they should use our lube and the benefits for them. We know that we have been very straight-focused, and we’re trying to expand. Right now, the thought behind it is that we’re new and we wanted to stay really focused. But now as we’re growing, we’re expanding the communities that we’re speaking to. So that’s a huge thing we’re focusing on this year and next year. 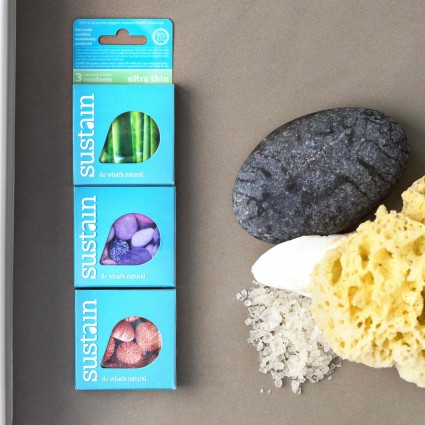 Lovability is a company focused on selling condoms to only women, and they sell their products in places like spas and gyms and boutiques — which is essentially where the more privileged would shop. And I was wondering what your response to that is.

Meika: I think that concept is great. That’s part of what we’re also doing. We’re sold in boutique places in NY. We have that part of the business, and I think that is important. But we’re also building a business on a much different scale than Lovability. 60 or 70 percent of condoms in the US are bought in drug stores, and as you heard, 40 percent of those are being bought by women. We’re focusing on the traditional retail outlets that sell condoms, as well as the other non-traditional, and another big point of focus for us is online. So, we’re using Amazon and our website as a place for women to read all about the benefits of our products, which they’re certainly not going to get when they’re spending a couple seconds in the condom aisle. And I have to be honest, we’ve talked to a bunch of those spa chains, and most of them are very uncomfortable selling these products, particularly condoms. So, it’s a balance for us. We’re focusing on a wider range or retail outlets.

Jeffrey: It takes more than one company to really change the landscape for women in the US. We think it’s great that Lovability is doing what they’re doing, and we applaud those competitors — but we think we have something unique and different to add.

This interview has been condensed and edited.