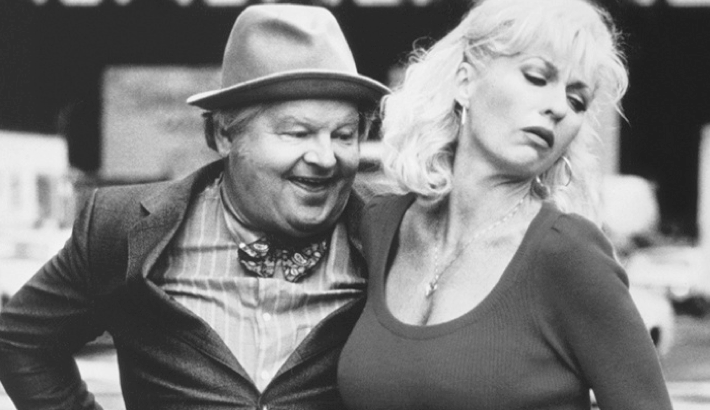 When it comes to dating, younger women don’t seem to mind dating men older than their fathers. What’s the deal? Benjamin Mann digs deep to explain why “grandpa love” is so wrong, and yet, s’alright.

An excerpt from “Sliding Into Home”, by Kendra Wilkinson

The next day I was in the shower when the phone rang . . .

“Hello, is this Kendra?”

“This is Hugh Hefner.”

It wasn’t a prank.

“I look forward to seeing you at my birthday,” he said. “Also, I’d like you to consider being my girlfriend.”

. . . “There was a world outside San Diego that I needed to explore – and I felt like Hef was the guy who would help me do that.”

Kendras are everywhere. Fortunately, they rarely get book deals. Unfortunately, it’s equally rare that they’re this honest. We always see women in their 20s and 30s boning fossils on pretenses like “maturity”, “confidence” and “intellect”. I don’t blame the dedication. If I were dating a guy with a waffle-pattern dick and Rogaine in his Thermos, I’d do the same thing. I’d memorize a list of awesome qualities that have little to do with age, suppress any recognition of superficiality, selfishness or insecurity and replace my wedding vows with a liability waiver from a bingo hall.

It’s no mystery that chicks have an endemic tendency to date older dudes. At many events I attend, some 24-year-old dame eventually rolls in with a well-dressed 40-something and the rest of the party spends 10 minutes talking about the elephant in the room. How do I know he’s the elephant? Because their balls look the same. For some peculiar reason, it’s always a younger woman with an older man. Hollywood is a perfect reflection of the trend. Alec Baldwin, Eddie Murphy, Bruce Willis, Clint Eastwood. That list goes on for a while. But dudes with older women? Ashton Kutcher and Hugh Jackman. One of them is now single and the other has been in the closet so long he’s a shoe-in for Monsters Inc. The Musical.

This is not to say that dating older men is necessarily a bad idea. Statistically, it can look like a good one. For instance, research was done in the UK that exposed a decrease in the proportion of marriages ending in divorce as men became 5 and more years older than their spouses. It was the opposite with women; as the female-weighted age gap increased, so did the frequency of divorce. That said, it’s worth noting that women live longer than men, it’s easier to cheat on someone that’s hooked up to an IV and it’s a lot cheaper to get money from a will than it is a divorce settlement.

I don’t care if women date older men. What I care about are the bullshit explanations. So let’s take a few minutes to inject some truth into the common “benefits” women site about older men.

Take an IQ test. How many questions did you find about how grapes are pressed in Tuscany? Really, none? You know why? Because remembering a lot of shit is not the same as being intelligent. I know plenty of people storing years of anecdotal information that can’t put together an Ikea pillow. The reason you’re able to read this article is because there’s a 29 year old out there worth $250 million that conceived of and built WordPress 10 years ago. Male brain development tapers off in our mid-twenties. After that point, we do our best to apply information and some of us learn how to not say as much dumb shit. And why would we, when we can just date a 23 year old to say it for us?

They won’t try to change you

After years of investigation women have discovered that the more you care about dying, the less you care about random bullshit. Bravo. What’s always fun is to watch this inevitably clash with a perception of “confidence”. Is he confident or is he desperate? Does he unconditionally accept my morning Martini ritual or does he just realize that getting head from a girl is better than getting arthritis by yourself? There are plenty of young men who don’t try to change you if you’re not all fucked up. Young people can be accepting too. And when they are, it’s usually for much more impressive reasons.

Sometimes with age will come a magic combination of experience + sexual self-confidence + tricks of the trade + chubby fingers. But realistically, you can often find the same thing with a young guy who has had a few flings and at least one long-term relationship. And while it’s nice at the beginning to have someone who hits the sack running, it is also quite powerful to develop chemistry through intimacy and communication. Then again, if you’re deficient in those two areas maybe a blue-hair with baggage is your best bet.

Being relatively indifferent can be a bi-product of confidence but they’re not the same thing. Trust me. A handsome 27 year old with a good job, good friends and a solid pecker probably has all the confidence you need. So for those of you thinking, “Ya, but how many of those are out there and single?” I think you’re getting somewhere . . .

DING DING DING DING DING! How often do you hear a woman talk about her new stud boyfriend in his 40s who drives an ice cream truck? Or the sexy older fling teaching ESL and taking the bus to work? Not too often . . .

There’s nothing objectively wrong with wanting your partner to open luxurious, stress-free doors and expose you to opportunities that once seemed out of reach. And your partner should contribute positively to your self-worth. But while there’s plenty of legitimate room for attraction to success and opportunism, both financially and emotionally, there is no room for fraud. Creatively justifying a glamorous back-up plan might feel good for a while, but it does little in the way of progress – personally and socially. I don’t doubt that authentic romance is possible amidst significant age gaps. After all, age is just a number, right? Well, until you remember that people deteriorate over time and then die. Which, I guess, means there’s more to a number than just a number? Ugh, my head hurts. I need an older guy. They’re good at math, right?

Benjamin Mann is a 30-something grown man with an earring. He is also Canadian. After getting a business degree, he and a few friends founded a brilliantly offensive Lifestyle & Humor e-zine called 2point0 for which Ben was the lead contributor. Upon wrapping up that endeavor, Ben went on to work in software product management for 9 years and continues to provide part-time consulting services when he is not using the ‘c’ word at traffic lights. Through his “Thinking Off” column on Gasm.org and his blog, This Is Your Brain . . . on Dating, http://yourbrainondating.com, Benjamin Mann is hoping to change the way everyone thinks about relationships. Especially you.